Meandering through the narrow, cobbled streets of Rome late one evening, we stumbled upon this masterpiece of a location… 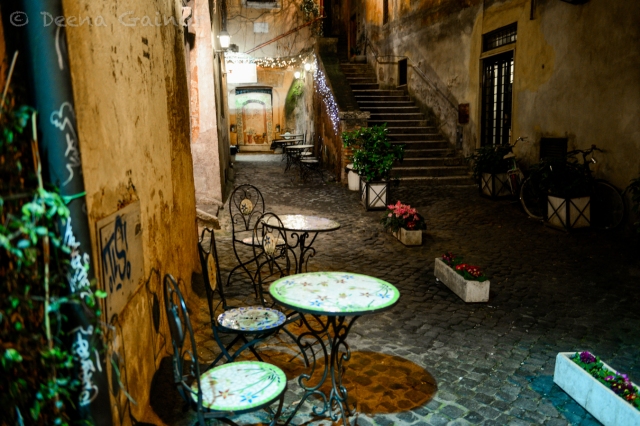 Piazza Navona!  It is a spectacular piazza, filled with gorgeous architecture, open air restaurants, musicians, vendors, and “starving” artists.  It also boasts a beautiful fountain designed by the renowned Bernini, and named Fontana dei Quattro Fiumi (aka the Fountain of the Four Rivers).

The story of Bernini and his Fountain of the Four Rivers alone is quite fascinating, though there are several versions.  Bernini was one of the most talented artists of his time.  When Pope Innocent X (who reigned in the mid-1600’s) announced a design competition for the creation of a fountain, the best artists at the time were all given an invitation to submit their designs, the best artists, that is , except for Bernini.  He was shunned as a consequence of either his close personal relationship with the previous papal regime or as a result of a previous failure.  (Please, if anyone knows the real reason, feel free to enlighten me). 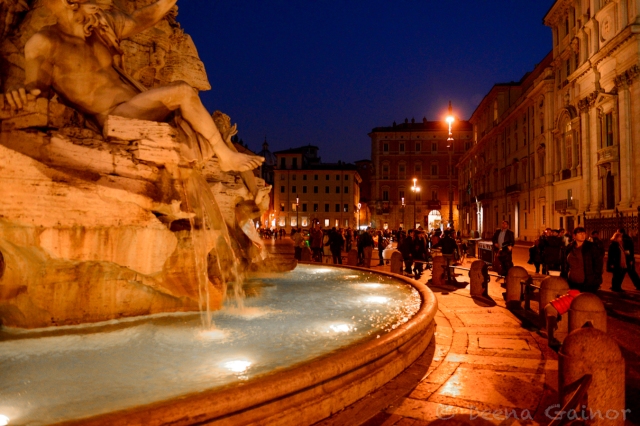 Bernini was determined not to be excluded, however; and with some encouragement from others, he hatched a plan for a model of his design to be seen by the pope.  It was a brilliant plan and the moment the Pope saw the model, the life-like figures, he knew Bernini was the perfect choice, despite his previous aversion and refusal to commissioning him with this task.  It is rumored to have heard Pope Innocent X say, ““…the only way to avoid employing Bernini was not to see his designs.”

To this day, the Piazza Novana remains an important central gathering place.  It is one of Rome’s most popular historic squares, and also considered one of its most beautiful. 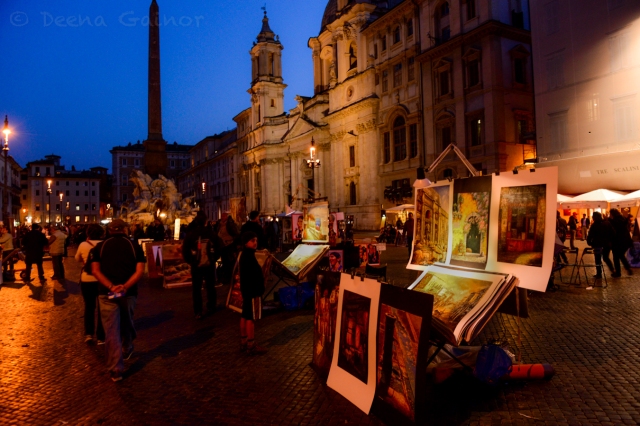 People gather to mingle, drink in the gorgeous Baroque architecture, play by Bernini’s exquisite fountain, or enjoy the sometimes friendly peddlers and musicians.  Many visitors admire the beautiful artwork and commission caricatures from the highly gifted artists amassed in the piazza.

Ryan, the kids, and I spent several evenings at Piazza Navona.  We loved navigating through the artists, observing them at work, and poring over their portraits and still lives.  Danny and Katie enjoyed the simple pleasure of playing on Bernini’s famed fountain while Ryan and Mikayla explored more artwork or tuned into the talented musicians performing. And Ryan (my husband) and I stood fascinated, completely engaged in all that was transpiring around us.  Most of our joy came from focusing on our children, immersing themselves in the experience.  Have I mentioned yet how much I love Italy?

And of course, we ended each night with…Gelato!! 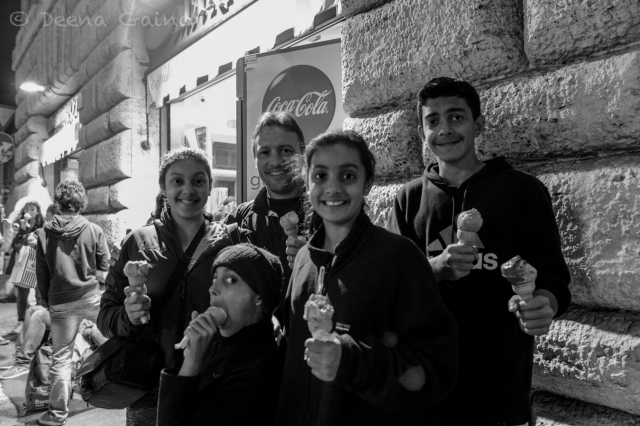 A few trivia questions for your independent exploration:

← The Refugee Crisis: Stepping into the Story
Football, Friends, and Family →