As we slowly say good-bye to the Middle East, to Turkey, Jordan, Israel, and Greece and head farther west, it’s impossible to not take time to reflect on the Syrian Refugee Crisis that has been intensifying over the past four plus years and affecting all of these countries and more.

While in the above mentioned countries, we enjoyed the history, century-old traditions, the cultures, and delicious food.  And let’s not forget the fresh hummus, the lamb gyros and falafel, or the creamy Gelato.  Our memories are intense and we were at times overwhelmed by the richness, the depth, the beauty we experienced.  In Santorini, more specifically, the stunning views of the crystal clear Aegean Sea captivated us.

Yet this brilliantly turquoise blue sea is the very same sea that has transported and sadly at times entombed thousands of fleeing, frightened refugees over the past few years.  Families from Syria as well as Iran and Afghanistan (and other countries) are desperate to escape the escalating conflict and violence, the religious persecution in their countries.  They are risking their safety and the lives of their precious children in perilous sea crossings or alarmingly lengthy border crossings because the alternative to stay would mean what exactly?  Contemplating the answer to that question has been painful, especially as a mother of four children myself.

The civil war in Syria alone has driven 12 million people out of their homes; half of them are children (World Vision).  Families are fleeing the violent governmental crackdowns, bombings, and the horrific human rights violations on foot and via flimsy life rafts, risking everything in the fierce pursuit of something more desirable…survival!

Refugees are extremely vulnerable.  They may be sick, hungry, malnourished, susceptible to sexual exploitation in the overcrowded, unsafe conditions. Many have seen violence, murder, death. Most desire a “normal” life, to live, work, educate their children, and to just feel safe, yet the former has become their normal, their reality.  And the threat of Islamic terrorist invasion further complicates efforts to aid refugees.

Our family lounging cliff side, enjoying a delicious meal, and delighting in a stunning sunset in the Aegean Sea is quite a stark contrast to the horrors faced daily, hourly by thousands, if not millions of refugees around the world, some experiencing this just a life boat away.  So where does that leave us? 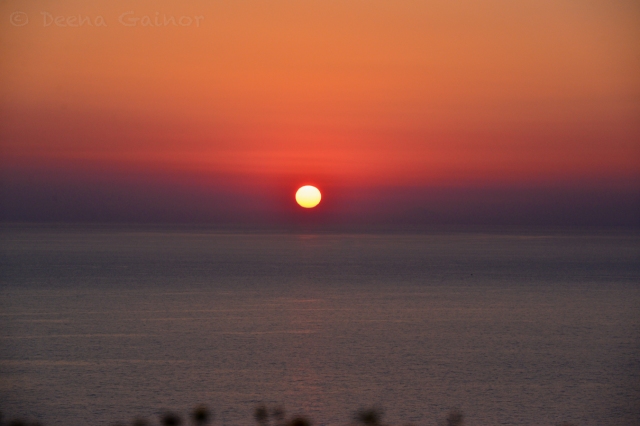 One of the main purposes of planning our Round the World journey was not to luxuriate in the affluence each country had to offer, though I can’t deny enjoying the times we were blessed to do so. Our real hope, however, was to connect with people, with ministries, and service opportunities making a difference in the lives of those immediately around them. We longed to expose ourselves and our children to both the raw harshness of people’s struggles and suffering, as well as the true beauty of life, community, and love in the midst of the realities of life. We wanted to experience God at work around the world, and He graciously granted our wishes.  He allowed us to discover hope at the center of the pain and suffering, in the midst of the chaos and madness.

That said, how is it possible to continue hearing about the staggering number of people being slaughtered, or being forced to subsist in inhumane conditions, without feeling a sense of overwhelming helplessness?  Most people who have researched anything about this growing tragedy along with other brutalities can’t be immune to the stirrings of sorrow and sadness, or even anger that these atrocities are occurring.  So again, I ask the question, “Where does that leave us?”

I have spent months wrestling with this question and really, the answer is both complicated and simple. I’ll leave the complicated solutions to the smarter, wiser, and better equipped scholars and world leaders.  As for the simple answer, I’ve discovered I don’t need to travel thousands of miles to war-torn countries in order to detect pain and suffering, or come alongside trafficked victims, or even stumble across refugees torn away from their beloved countries, devastated and lonely in a foreign land.

No, the truth is, they are in my own backyard, almost quite literally. For example, in the Chicago area alone, it is estimated between 16,000-24,000 girls/women are sexually exploited daily.  In Dupage County, IL, organizations like World Relief have been assisting refugees from all around the world.  With the Syrian Refugee Crisis intensifying, they are already supporting organizations and churches in the Middle East and Europe as well as preparing the Chicago area for what lies ahead.

So now the question becomes, “How do we step into this story?”  Please pray for us.  Hopefully I’ll have some answers for you in the following months.  Thanks for taking the time to read.

Practical ways we can help:

World Relief: We are 104 staff joining with 75 churches and 750 volunteers to serve 5,500 refugees and immigrants each year. World Relief is working in the Middle East, in Europe and locally through WRDA in Dupage and Kane Counties to respond to the crisis of refugee fleeing Syria and the Middle East, as well as from many other countries around the world.

World Vision: Your gift will help World Vision meet the urgent needs of Syrian families. Displaced Syrian families lack adequate shelter, clothing, food, and basic supplies. World Vision has scaled up our response to the crisis, and your help is needed more than ever. Without increased humanitarian aid to Syria and border countries, more refugees will flow into Europe. We must help refugees and internally displaced people, half of whom are children, by giving them the vital resources they need to keep children safe, healthy, and secure. Please pray for these children, and give a gift to help Syrian families today.

Samaritan’s Purse: Samaritan’s Purse stands ready to respond at a moment’s notice whenever and wherever disaster strikes. We specialize in meeting critical needs for victims of conflict, disaster, famine, and epidemics throughout the world, often working through ministry partners on the ground. We provide food, water, shelter, medicine, and other assistance in the Name of Jesus Christ.