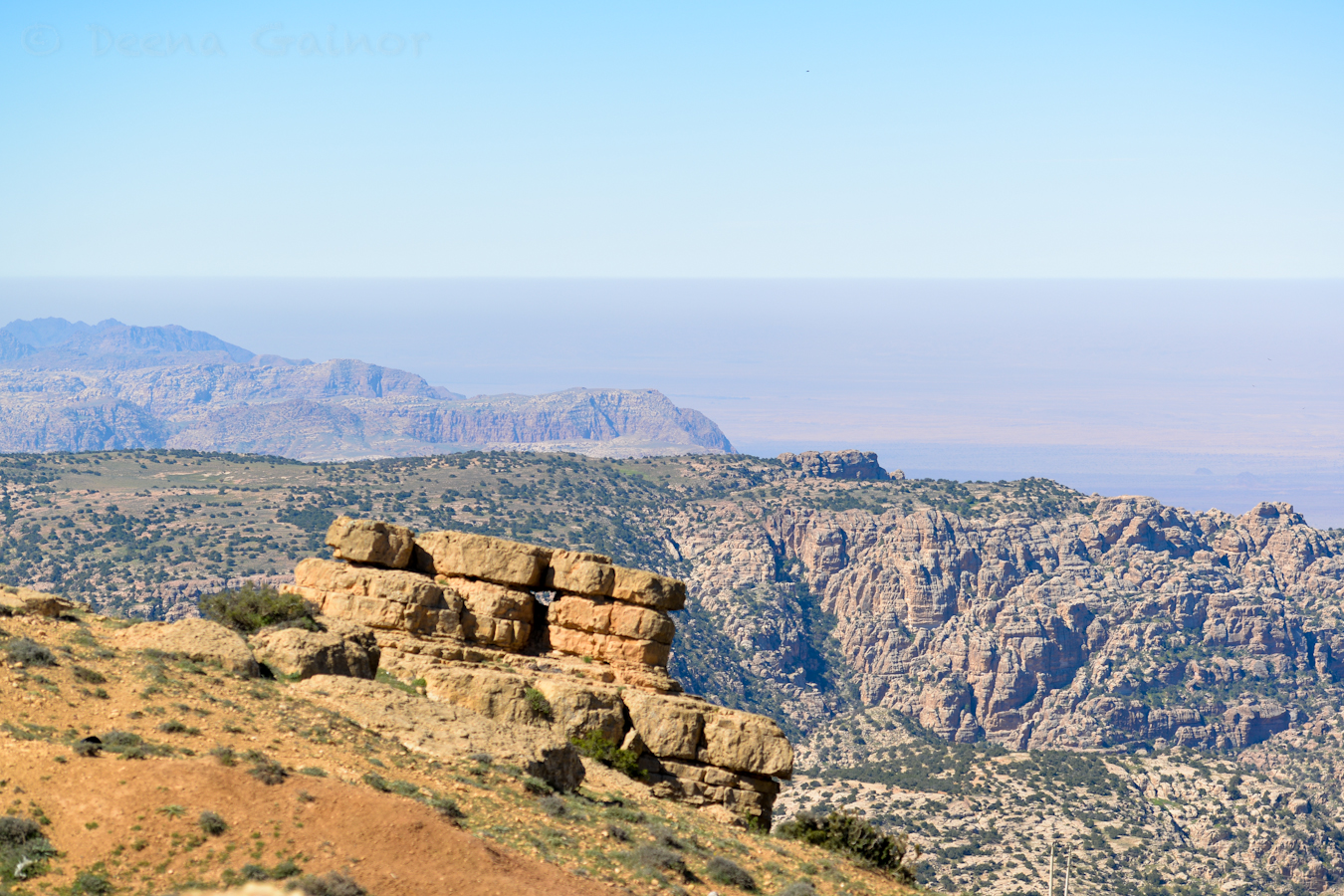 After enjoying a few days in Jordan, we headed to the Jordan-Israel border at Allenby/King Hussein Bridge, as we had opted to drive to Jerusalem versus fly into Tel Aviv. We found that the easiest way for our family of six to do this was by arranging for a taxi to the Jordanian side of the crossing from our hotel by the Dead Sea.

It was so much faster, we thought…just an hour or two away to our destination from the Dead Sea by land.  Why go through the hassle of checking in for flights at the airport, making sure our bags were under the allotted weight, waiting a few hours after check in, landing in Tel Aviv, etc., only to drive an additional hour back toward Jerusalem?  Smart choice, right?

Wrong!  DON’T DO IT!! Unless you’re ok with utter chaos and are willing to push your way through massive crowds, even shoving an occasional elderly very rude woman out of the way, that is.

Well, let me back up a bit. Maybe I should mention we did this on April 3rd, Good Friday…so we could attend Easter Service at the Garden Tomb with our friends that Sunday.  So yes, it was Easter in Jerusalem!  We were expecting crowds and a bit of chaos, but nothing like what we actually ended up experiencing that day.  It was pure chaos.

Arriving on the Jordanian side was actually quite tame.  We were informed that lines can be rather long and not everyone gets to cross before the border is closed.  We didn’t want to risk that happening, so we arrived early.  Thankfully the line wasn’t too long.  In fact, it was short but the wait time still took forever, as every single person and their documents were inspected very carefully.

We finally got through both inspection stations, handed over our passports and $20 Jordanian per person for departure tax, and boarded the awaiting bus.  I have to say, it’s always a bit nerve-wracking when you hand over your passport and have to trust that you’ll get it back, but really, we had no choice.  And so we waited on the bus that was to carry us all over together.  And we waited. Apparently, the whole bus had to be filled before we could move.

After about an hour, officials boarded the bus and began to hand out passports.  (Yes, I could finally breathe again).  The atmosphere was a bit tense, because we had no idea what to expect, but this official handing out the passports lightened the mood a bit when he got to our family.  Apparently having four kids is quite fascinating, at least it was to him.  Here he is, laughing as he continues handing us passport after passport.

And then we were off.  Before we knew it, we had arrived on the Israel side.  That’s when the chaos ensued.  At first glance, everything seemed quite orderly, as there were several stations to get through and a nice long “snake” line with handy rails separating the masses.  As we stepped off the bus, however, there was a mad rush to get into line and the pushing and cutting began.  But that was not the worst of it.

Remember that nice orderly snake line I told you about?  Well…the man in charge of allowing people through one family at a time must have gotten bored with the order and sanity.  As more buses pulled up behind us, he decided to just open up the front of the line, no more waiting for one’s turn, no order necessary.  At this point, people piled through the entrance like cattle with their large suitcases, herded into the smallest amount of space available.  It was every man for himself.

We were herded in along with many others, trying our hardest to hold on to our kids and our suitcases while not getting run over.  Confusion was rampant because no one knew exactly which line they needed to get into, and everyone wanted to be first.  Once we guessed, we had to literally fight our way through to the front and then fight our way out…and on to the next line, while trying to keep an eye on our four kids and six suitcases, as well as our backpacks.  There were no directions and no helpful staff around to assist.  (I would have loved to snap a shot of the chaos, but between the pushing, shoving, elbowing, and the presence of armed security guards, I thought it best to forgo this impulse).

Once we got to the front of each line, people were shoving us from behind, long arms stretching over our shoulders and heads to be serviced first.  The men working each counter grabbed whatever was in front of them, not worrying about the “next” person in line.  It was chaos and the funny thing was, we were never exactly sure what we were doing in each line.

What we were sure of, however, was that we needed to “fight” our way through the chaos or we’d be in the lines all day, as buses continued to arrive, fully loaded with more people!  And yes…I wasn’t joking about the shoving of rude, elderly women, jamming hard suitcases into our backs and trying to bypass us in line.

Meanwhile, there were also men offering to “help” get our bags where they needed to go.  Each man was very friendly and helpful, however, each one was also giving us conflicting information.  We had to ask ourselves, who can we trust?  And if we do trust someone, will our bags magically appear on the other side of this mass chaos, as promised?  We had our doubts but truthfully, I don’t think we had a choice.  So we “let it go” and hoped for the best, all the while being jostled to and fro by others.

Wow!  As I retell this story, my heart is quickening as I remember the stress of those few hours. Hold on a second while I take a nice deep breath…

Ok, I’m back.  So…this whole process, from the departure point in Jordan to the entrance into Jerusalem took about six hours total, about four hours longer than it normally takes people, due to the holiday, I’m sure.  Rather than sharing all of the minute details that got us through, let me summarize what we think we understand about the process we went through.  I hope it’s helpful, although you’ll have to check the accuracy of all said statements below!

1.  Arrive at the Jordan departure site and have your bags scanned prior to entry, leaving your scanned bags outside, by the large bus waiting.

2.  Enter the departure area, and collect the documents you have to fill out, filling them out while you wait in line.

3.  Make sure to have your passports ready.

5.  Head on over to window number 2.  Once you’ve been cleared, you’ll be asked for the departure tax payment in cash.

6.  Once you’ve paid, head on out to the bus area, where you’ll make sure your bags get onto the storage area of the bus.  Then hop on the bus and wait.  Keep in mind, you will not have your passports with you.

7.  Eventually the guards will return your passports and you’ll be on your way to crossing the bridge, which may take about 15-20 minutes.

8.  Once you are dropped off on the Israel side, collect your bags and get into the snake line immediately with your bags.

9.  Once you are let “in”, trust the luggage men to keep an eye on your bag, and go up to the first counter to pay for each bag.  They should give you a receipt per bag, that you will give to the luggage men.

10.  Next, push your way into the next line, where they will just glance at your passport, and hopefully let you in.  At this point, you think you’re done.  You’re not.

11.  You’ll enter the building, and find another long snake line, where you are to go through security with your hand luggage.  It’s very similar to a security line at the airport.  People are barking orders at you, but half the time, they’re confused themselves, first telling you to go through with your kids, then splitting you up, then angry you’re not with your kids.  Again, it was chaos, and I was surprised by the disorganization.

12.  Once you clear security, you’ll again think you’re done, only to turn the corner and see another mess of long lines, waiting to get through one last check point, the most important one.  This is the one where they grill you with many questions, and interrogate you if you are at all suspicious.  But first, you have to get through the lines, which are almost impossible.

There are maybe 15-20 separate lines, so you just pick one and stand in it.  However, since organization is not a priority here, there are no dividers.  Many people boldly walk right up near the front, and just cut in line, pretending to be with someone else.  You can either let it go or make a scene.  We let it go a few times, but then people got really pushy and bold, and we had to put a stop to it.  Not fun!

13.  And finally…you’ll arrive at the coveted counter.  Just pray you get a nice official, because most of them seemed very stern, intensely interrogating each person before allowing (or not allowing) them through.  We were fortunate enough to get a young friendly female who actually smiled when she saw me.  She asked if I was Indian and said I looked just like her best friend!  I asked if her best friend was nice, and she laughed, and said yes.  She then smiled at the kids, asked a few questions, and got excited when we explained that we were traveling with our kids for a year.  She thought that was really neat and proceeded to wave us right through.  We were shocked but very thankful.  Don’t expect it to be this easy though.  Judging from other’s interactions, this was not a typical experience.

And finally, you’re through.  You’ve made it to the other side. Now you have the daunting task of trying to find your luggage.  This was not easy either, as you’re let into a very large room with suitcases scattered haphazardly everywhere!  But we eventually found our bags, cleared security once more, and exited.

Now on to the next adventure…exchanging money.  You will most likely get ripped off, as the money exchange counter may conveniently (or more likely inconveniently) be closed.   Paying with alternative currencies for transportation into the city is permitted, however, the exchange fee you are charged is crazy (and wrong).  If you want to get into the city, however, you really have no other choice but to pay the exorbitant pricing.

And finally, you can either get a taxi, or the more recommended and affordable shared taxi (called a sheroot) to take you into Jerusalem.

So…that was our experience crossing the border into Israel on Good Friday!  And here’s a PS:  Nick and Angel…hard as it was, it was all worth it to see you guys!!