Mayan Meals, Games to the Death and More

Mayans had meals that may not be appealing to many of us in some ways, though they ate things that we would eat today, like fruit, cornmeal, corn.  They would also eat rabbit or turkey as well as soup and beans.  Even chocolate.  Sounds pretty yummy, right? Hey, they even ate tacos.

Did I mention the tacos were bug tacos? Did you throw up or lick your lips in anticipation? You may want to skip this paragraph, or maybe you want to grab a notebook and pencil so you can jot down some Mayan delicacies and eat them later.  Iguana meat was a dish and of course, monkey.  Another one of their meals was tadpoles with cactus.  I think they ate just about anything they could find that was living.  Yes, there were even cannibals during the end of their civilization.

As you know, we recently went to Tulum.  (If you don’t know, where have you been?)  We saw some of the great structures they built. Their buildings had a lot to do with their religion, and they had a lot of temples. 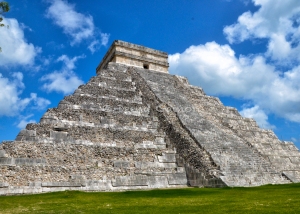 Supposedly, peasants would willingly build to pay homage to their gods.  They would build pyramids (not to be confused with Egyptian ones, which look different), palaces, and many other buildings.

The homes of the peasants were built of slightly less quality.  Mud walls and a hay roof being held up by poles was not necessarily a palace, yet they still built amazing structures that are still around today.

The Mayans played a game called Pok-A-Tok, which is not a game I would want to play in that time period, but I’ll get to that in a second.  It was also known as The Ball Game, and the goal was to get a small ball into a ring high in the air without using your hands.  It is like soccer, but ten times more difficult, because if the ball hit the ground, the game ended.

The reason I’m not a fan is because whichever team lost usually died, and the winning team was thrown a feast and honored. The fun is not worth the death afterwards if you lose.  Being a sports celebrity back then just wasn’t as fun as it is now.