On Friday, we decided to go to a resort in Tulum for Kathryn’s birthday. We were first going to see the World Famous ruins of Tulum, so we took the ADO to Tulum, from Playa Del Carmen. We asked the lady at the desk how long it would take to get to the ruins of Tulum, and she told us not more than twenty minutes, walking.

I don’t think the lady liked us very much, because it took over an hour to get there, and we all had forgotten to bring water except for Dad and Mom. When we finally got to the ruins, we were so hot and thirsty that after 15 minutes of looking at the ruins, or, in my case, almost fainting, we left and went straight to the resort.
At the resort, we got water and a chance to sit down. As tired as we were, we still wasted no time in getting to the restaurant and eating lunch. I had very good enchiladas and crispy tacos, and they kept the chips coming too, which was nice.
We swam a majority of the time at the pool and beach, and there was even a floatable, climbable blob in the ocean that we could jump off of. Mom and dad, of course, just laid in the sun and got sunburned, because that’s what adults do. 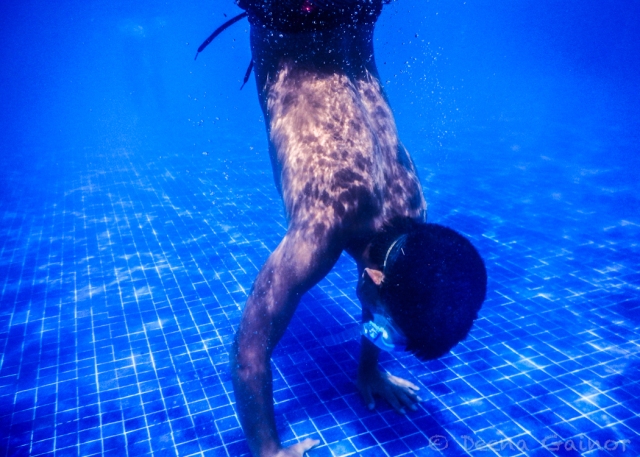 For dinner, we went to a French restaurant called Bordeaux, pronounced (bored-oh) and I decided to eat pork marinated in a really tasty sauce. It tasted just as good as the name was fancy.  It was pretty fancy.  I forget what it was called.  Maybe my sister Mikayla could tell you; she knows some French.
We were zapped, but I wasn’t zapped enough to skip dessert. I chose to eat cheesecake, which I don’t think is a French delicacy, but it was good nonetheless. After dessert, we were even more zapped, even though sugar is supposed to energize you. We drove home in two taxis, fell into our bed, and crashed.