Normally we arrange transfers for our clients, but on our RTW trip, we’ve tried to wing it as much as possible, because something as simple as trying to negotiate taxi fare can provide a great look into the life and heart of a culture. 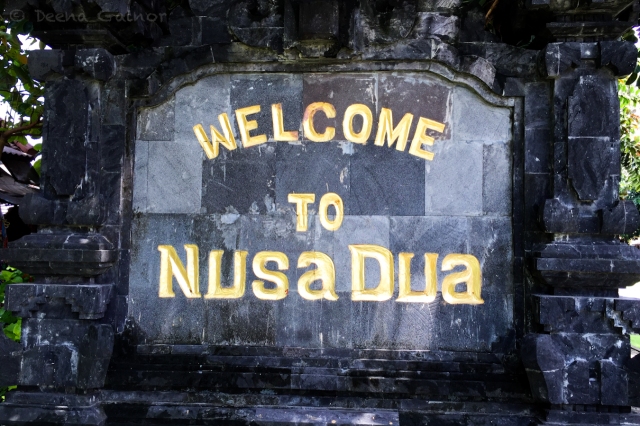 Well, we were not disappointed.  We landed at 9pm Indonesian time, but it was already midnight in Sydney.  Needless to say, we were all tired.  As soon as we entered the taxi area, we were bombarded by extremely aggressive drivers, trying to win our business.  One in particular was overwhelmingly persistent.  Ryan was not with me at the time, because he was withdrawing money, so I had to pull myself up to my full 5’8″ and say “NO THANK YOU.  Please go away!”  He backed off for a while, but I could feel his eyes following me.  Unbelievably, when Ryan emerged, he began to hound Ryan.  He offered a decent price ($250,000) and despite the bad feeling in my gut, we followed him, as he was one of the few that offered a minivan, big enough for all six of us.

As our bags were being loaded, we kept asking questions to clarify what was included, e.g. tolls, gas, etc.  Finally, after all six bags, kids, and backpacks were squeezed into the minivan, he wanted us to pay him before departing and we refused.  He insisted that was normal, and we insisted on a receipt before going any further.  He refused, and then dropped the price to $200,000 IDR.  We continued to refuse, and finally just said no.  We got out of the vehicle, unloaded all of our bags, and walked away.  This surprised and angered him, but there was just something about this guy that made me feel very uncomfortable.  I was more than willing to pay double the price than go anywhere with him.

We returned to the taxi area.  We must have made quite a site, two adults and four children trailing back in a straight line, all pulling suitcases and carrying backpacks.  Keep in mind, it is after midnight in Australia at this point, so we were all increasingly exhausted, but equally determined to not get taken.  A friend (thanks, Becca) had recommended Blue Bird Taxis, and while we couldn’t find anyone in Blue Bird uniforms or cars, we were finally able to find someone who did work for Blue Bird.  He was honest and kind, and I immediately trusted him.  Unfortunately for him, the first taxi guy continued to hound us and him, pressuring him to “give us back”.  We put our foot down and said we were not going anywhere with him, and we got into the new vehicle.

As the man continued to argue with our new driver, however, I snuck around to watch them, and finally saw a very frustrated driver slip guy number one some money.  Truly I was livid.  This guy was a bully and was threatening our driver.

When we got back into the car, I questioned our poor, frazzled driver about what had just happened.  He explained that the guy is like the Mafia here, controlling, extorting, and cheating people.  If he refuses to pay or goes to the police, there would be a lot more trouble for him, so it is just easier and safer to pay him off.

How sad!  We know these things happen all over the world.  We saw it in Mexico and Tahiti.  It doesn’t, however, make it any less tolerable when we encounter it.  I can’t imagine having to live under the threat of harm or damage to property if not willing to comply.  We were extremely thankful that God had kept us from going with him.  I don’t think things would have ended too well for us had we ignored our misgivings.  But…my heart goes out to people who live this every day.