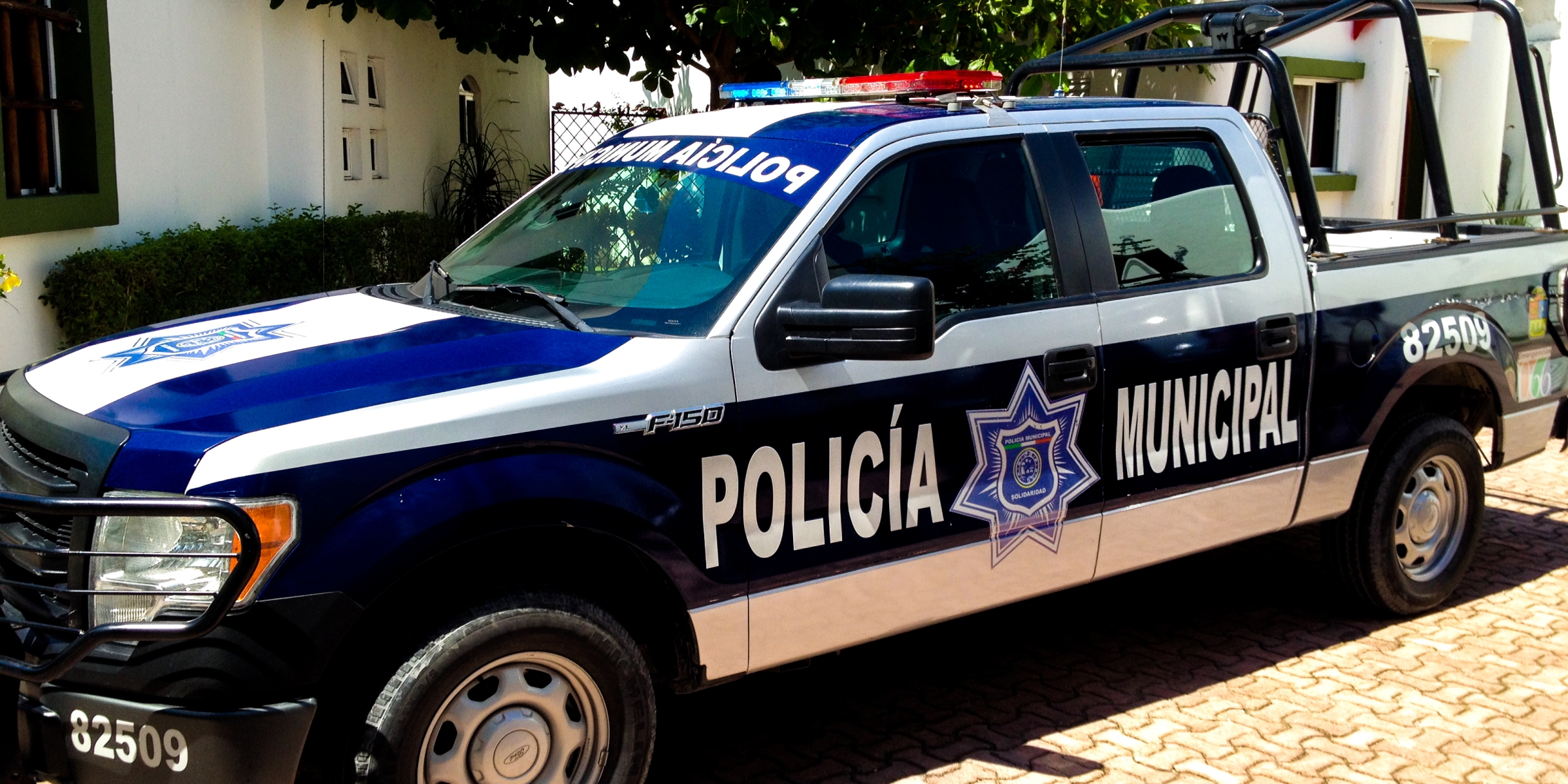 We knew it would happen at least once.  We even tried to mentally prepare for it, wondering what would be stolen first.  Like most responsible travelers, we also made sure we had travel insurance.  But the truth is, unless you’ve gone through something like this before, there really is no way to prepare for…The Break In.

The screened window in the girls’ upstairs bedroom

So, what happened?  Saturday night, while we were sleeping, a stranger scaled the walls of our home, traversed the roof, and swung himself into the screened window of our daughters’ second floor bedroom, while they were fast asleep.  Unbeknownst to us, the screens slide open easily in order to have access to the storm covers, so it was not difficult at all for our intruder to gain access.

Once the burglar entered, he ransacked the room, stealing anything of value he could find.  Unfortunately, Mikayla’s laptop and a few other valuables were at the top of his list.  She had worked late on her blog the night before, and exhausted, placed her laptop by the side of her bed, in plain view.  Thankfully, Mikayla and Kathryn didn’t hear a thing, and continued to sleep soundly.  We didn’t know until later how thankful we should have been!

We’re not sure what happened at that point, but we have our theories.  Ryan and I were up very late that night, until almost 2am, as we had had a very heavy work schedule that week and were trying to wrap up some things.  We suspect that the burglar did not realize we were still awake when he entered the girls’ bedroom; however, in the middle of the break in, he may have heard us and decided to flee.  We suspect this because only things from Mikayla and Katie’s room were taken (at least, that is all we’ve identified up until now).  We found the house keys missing, however, so he must have grabbed them on his way down the stairs, and then he let himself out through the patio’s glass sliding doors, as we found them unlocked the next morning. 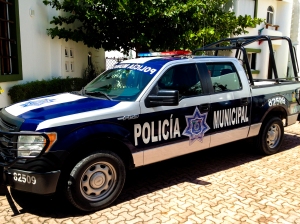 The Policia were asking if there were other valuables they had missed?! Not sure exactly how to answer that one. 🙂

We first contacted the owner of the house, to get a little direction.  She contacted Miguel and his wife Ty, who help manage the property.  They were wonderful!  They dropped everything that morning, and came over to help us through the whole process, contacting the policia themselves, and then being present when both the security guards and the policia arrived to ask questions and investigate.  While all the drama was going on, we invited their two sons in for a swim and a little pizza party.  It helped to lighten the mood!  It was probably one of the highlights of the day for our kids.  (Gracias, Miguel and Ty, for sharing your little ones with us!) 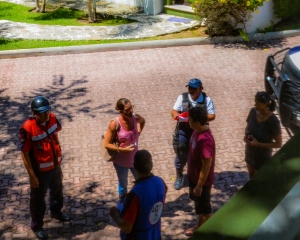 Miguel’s wife, Ty, helping convey the details to the policia

A week later, we are still trying to process the break in.  I don’t mean the logistics of what happened and why, but the invasion itself.  Obviously, our first reaction when we woke up that morning was one of fear, initially followed by relief that none of the kids had been hurt.  Our relief came from a false sense of safety, though, because the assumption we made was that thieves in this area meant no harm, and were only there to see what they could get.  If we startled or surprised them, we assumed they would just run. 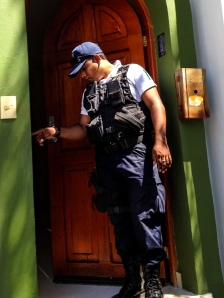 The Policia conducting their investigation

WRONG!  The policia and our Spanish teachers quickly corrected our misconceptions.  Often, they told us, ladrones (the word for thieves) come armed with knives and guns, and they are prepared to use them if they are startled.  Sometimes they are looking for money for drugs, so the scenario is often not a safe one.  We had NO idea!  We have felt really safe in this area, because it is a very touristy area, but life is different outside the safety of security walls and guards  in the resort areas.  Now we know.

So what should we be feeling?  Well, there are a number of reactions people have when they know their home has been invaded, their space intruded upon. The worst, however, is knowing that it happened when not only you, but your precious children slept peacefully in their beds.  The knowledge that a stranger was inches away from the the girls was and is still frightening.  When this knowledge makes its way past the shock and surreal feelings, it could have had a paralyzing affect, and I have to admit, that first night after it happened, I was unable to sleep.  I was up every few minutes, listening carefully for noises, getting up to look around, and even once, getting poor Ryan out of bed because I was sure someone was in the house again.  I was tempted to stand guard by my kids’ beds!  I know, a little crazy.

But this didn’t last long.  While it may be easy to struggle with loss of trust, fear, anger, frustration, etc., we knew we needed to turn this over to the Lord.  “Do not be anxious about anything, but in everything by prayer and supplication with thanksgiving let your requests be made known to God.  And the peace of God, which surpasses all understanding, will guard your hearts and your minds in Christ Jesus.”  Phil. 4:6-7

These verses may be very familiar but the question is…do we really believe them?  Can we have a spirit of thanksgiving or feel true peace, knowing how fragile our lives are?  Knowing that there are actually people surrounding us that mean us harm and not good?  Yes, because God’s grace  sustains us day by day.