This is the title of our friend’s new website.  We have know Eric now for almost five months and have watched the struggles and sadness he has had to endure as he battles to get his children and hopefully also his wife back with him and to the United States.  As we have gotten to know Eric over the last 5 months, we have spent a lot of time in conversation, learning more about the trials he and his family have faced since before January of 2013.  We have tried to put ourselves in Eric’s shoes and to be completely honest, the thought of having to go through what he has had to endure is unimaginable to us.  The journey has been long and painful and we join with Eric in praying for restoration, healing, and justice.  Thankfully, God is sovereign over all things, and this is no exception.

Below is a little clip to his story.  Please take the time to read a little of Eric’s story and then share it with your friends and family.  You can find the story here:   End Abductions Now!  My Story. 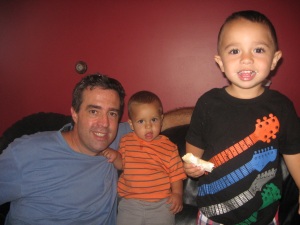 The boys with their mom

Eric and his wife

My name is Eric Richard Haan and my children have been the victims of international child abduction.  I have not seen my now 4-year-old son, Pablo Richard Haan, and my now 3-year-old son, Joshua Francisco Haan, since January 14th, 2013.  Both boys were born in the state of Michigan in the United States, are U.S. citizens, and except for vacation trips to Mexico, have lived in the United States for their entire lives.  In what we believe is a clear violation of international law, my children are being retained in Playa Del Carmen, Mexico (just south of Cancun) and I am trying to have them returned to their home in the United States in accordance with the Hague Convention on International Child Abduction, which has been ratified into law by both the United States and Mexico.  Please visit End Abductions Now!  My Story for more information and please take the time to share this story with others.